Horsey has a home! 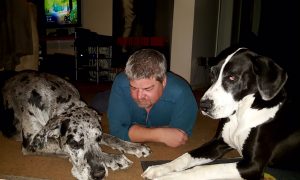 Horsey has a home with her foster family Jaimie and Devin in Denver, CO.   Jaimie and Devin are long time dedicated volunteers for RMGDRI.   Horsey was the families 63rd foster Dane from RMGDRI !!   Needless to say… after that many fosters Horsey was the one who stole Devin’s heart from day one!   She came right up and gave him a snuggle and cuddle and pulled at his heartstrings.  Both Devin and Jaimie knew from that point Horsey had claimed her stake and wasn’t going to leave their home.  Jaimie and Devin have affectionately renamed her “Hera”